My interview with Checkpoint 303

Tell us more about the group (creators, information) 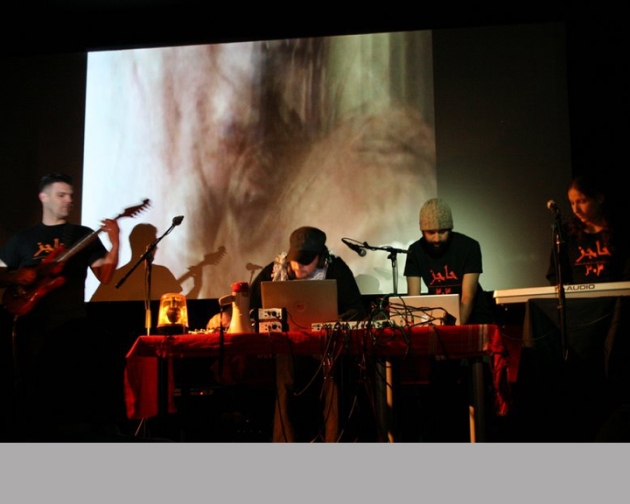 Using site recordings from Palestine, Checkpoint 303 (or in arabic „Hajez 303“) constructs soundscapes that weave cinematic audio with experimental sound processing and complex rhythms. Through its compositions, collected sounds and noise, Checkpoint 303 spreads a message of peace and a call for the respect of human rights. Contrasting with the mainstream media’s exclusive depiction of violence and suffering in the middle-east, CP-303’s sound collages also report on the heroic hope that subsists in the region as well as the seemingly banal but ever so meaningful little things that embody a daily search for normality in a state of emergency.

One of the highlights of CHECKPOINT 303’s live performances includes being invited by Massive Attack to be a support band for shows in the UK in 2007 and in France in 2008 and 2009. Checkpoint 303 has performed in many alternative venues and spaces where the aesthetics and meaning of sound/noise and its link to social activism can be reconsidered and explored…  Over the last two years, Checkpoint 303 has performed electronic and live sets in several countries (USA, Australia, Canada, France, Palestine, Tunisia, Belgium, UK, Italy, Spain, Bosnia & Herzegovina and in Japan) spreading the word for peace, freedom and human rights through a blend of twisted electronica, downtempo, breakbeats, drum’n’bass, oriental riffs and field recordings…

The combination of these styles as yours, is it difficult?
For us it is natural to mix these different styles, fusing electronic music with oriental sounds and with abstract field recordings. We are interested in arabic music but also in many western styles including post-rock, breakbeats, downtempo, etc. We are also interested in the sounds of youth culture and underground subculture in the Middle East, North Africa, Eastern Europe, Latin America and across the planet.

From what inspire? Your last song is pretty good.
We are inspired by the challenges of daily life under occupation and the fight of civilian populations for justice and freedom. That’s what drives our creativity. We are alqso inspired by the words of poets, writers, intellectuals and freedom fighters from Palestine and from all other countries. Our last song „Said Guevara“ was a tribute to the great palestinian intellectual Edward Said. You can listen to it the song or download it from our website.

Is it difficult to similar music works in your country?
No I don’t think it’s difficult. Performing electronic and experimental music relies a lot on home studio technology, a portable laptop can nowadays be transformed into a full recording studio. The important thing is recording sounds and finding the inspiration to use them in a creative and aesthetically appealing way.

What are your future plans – will make you tour and how one could hear you?

We will soon be doing concerts in Paris (June 11th) and in Göteborg in Sweden (June 13th) and possibly in Denmark in August. Our music is available for download from the audio section of our web site and can be checked out also on myspace. The news section of our website contains announcements of gigs and graphic work we consider to be part of our activist concept. To be updated about our releases and upcoming concerts you can sign-up to our mailing list by going to:
http://checkpoint303.free.fr/contact_303.php

5 responses to “My interview with Checkpoint 303”